On April 11, 1992, the business was incorporated as Stevens Masonry Construction, Inc. Esther  Stevens served as CEO and secretary. Edwin C. Stevens served as vice president and treasurer. On August 7th, 1999, ownership of the business was transferred to their sons, George and Edwin, as equal partners. George and Edwin shared positions and duties until George’s retirement in 2010.

During this time period the company constructed many notable buildings in the tri-state area including educational, business, retail, expansions, and new construction—including New Castle Jr.Sr. High School, which won a Golden Trowel Award for Interiors, along with Youngstown Tile and Terrazzo Company.

Currently, Stevens Masonry Construction, Inc. is headed by president Edwin G. Stevens. Jeananne Stevens, wife of Edwin G., serves as office manager and secretary and has been involved with the business since its inception. Their son, Dylan K. Stevens, serves as operations manager, estimator, and project manager. He’s the 4th generation of the family to be involved in the trade.

Dylan had been part time with the family business since he was old enough to walk—and his dad has pictures to prove it. He’s been full time since graduating from Thiel College in 2016 (BA in Business Administration) with specialty tracks in Management and Human Resources.

Other current team members include:

Stevens Masonry primarily performs commercial work, but completes some residential jobs if they fit into their schedule and capacity. Most work comes from referrals and word-of mouth and the vast majority is done within a 50 mile radius.

A few of their notable projects in the area include: 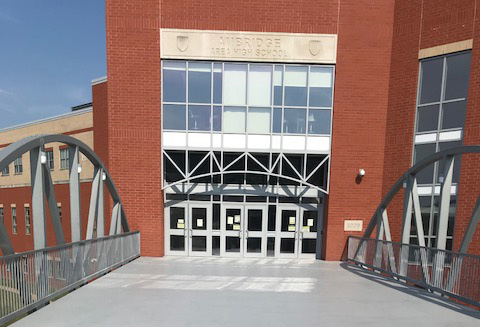 One of the biggest changes Edwin has observed in the industry and nature of the work is the increase in variety of materials and finishes, such as stone, steel, glass, precast. There are always new materials being developed.

“At one point we were almost all block, brick, stone—real stuff. Today, it’s mostly synthetic. We had always stayed away from concrete, but that changed too. There’s also been a change in the scope of the masonry work—larger units, utility brick, split face block, big cast stone units,” says Edwin.

Stevens Masonry has been certified in insulated concrete forms (ICF) for approximately 5 years. In fact, they were hired to construct the hotel wing of the Youngstown Air Reserve Station in Vienna out of ICF.

Other certifications that Stevens Masonry personnel hold are OSHA 10 hr/30hr training and Silicosis Training with Compliance—all provided by the Builders Association of Eastern Ohio and Western Pennsylvania.

Additionally, all of Stevens employees are certified in masonry grout installation and masonry restoration compliance and training, which are all provided by the IMI (International Masonry Institute). Edwin G. Stevens holds an associate degree from IMI Ciontractor College’s founding class from the year 2000.

Edwin also notes that in recent years there has seemed to be fewer and fewer mason contractors and qualified labor.

“When I started my apprenticeship, I took night classes at Lawrence County Vo-Tech. In a class of 20-30, about half of us were going to be moving directly into business with an uncle, father, etc. We would be contractors, foremen, or owners following in someone’s footsteps. Recently it’s been tough to get people interested.”

One of Stevens’ bricklayers, John Decampli, is also a recent graduate of the school. Decampli has also completed a 4 year apprenticeship with BAC Local 9 PA.

“There were hardly any students in the masonry class. Actually, they no longer teach it,” says Decampli.

The company’s biggest struggle over the past 5 years has been finding qualified, reliable manpower. For some jobs, they’ve had to make temporary hires from as far away as New York and Indiana.

However, there is some optimism as there are signs of renewed interest in the building trades.

“We’ve been lucky to attract some good young people,” Edwin says. “And we’ve got positive feelings about the direction of apprenticeships. I have more hope now than I did five years ago with the younger generation and their interest in the trades.”

Another notable change that Edwin has seen in recent years is a shift in the proportion of new construction work and restoration work.

“At one point it was nonstop bids on new construction, but we’ve gotten into a lot of restoration work over the last 5 or 6 years. Evidently a lot of people have decided to invest in remodeling their facility instead of building new. We’ve adapted.”

Dylan says the company’s extensive experience had them in a good position to capitalize.

“Our background in new construction gave us an edge in the restoration transition, since we already knew how to construct the buildings from the ground up. That made the restoration a natural adaptation.” Before and after restoration work at Paxton’s Restaurant, Greenville, PA.

Edwin says the company is always open to adapting. He was one of the first graduates from the International Masonry Institute (IMI) contractor college, and regularly pursues continuing education programs through the institution.

Stevens Masonry is committed to continuing education, training and jobsite/work scope adaptation for all personnel and associates. Following established best practices and surpassing industry standards are commonplace for the company on a daily and project basis.

Stevens Masonry has been a member of The Builders Association of Eastern Ohio and Western Pennsylvania since shortly after the company was founded.

The Association, under the leadership of Executive VP Kevin Reilly, has been and continues to be an asset and professional resource for Stevens Masonry and the Industry at large.

“I would recommend the Builders Association to anyone in the building trades. The quality of the programs, training, social functions, contract negotiations and networking well outweigh the minimal investment of time and monetary cost,” Edwin says. “It’s a special group of people. There are competitors, but everyone there has integrity. I wouldn’t hesitate to subcontract for any of the general contractors there.”

Edwin is a former president of the Association (2013), currently sits on the executive committee, and is a CAP Trustee.

Looking forward, Edwin sees Stevens Masonry continuing its success by adding more quality members to the team and maintaining the principles of honesty and integrity the company was built on.

“Of all the great employees we’ve had over 35 years, I wouldn’t trade these guys for anyone. We just need to find more of them. I thank Our Dear Lord every day for the work and the team he has provided for us.”

Benefits of The Design-Build Delivery Method in Commercial Construction