With a rich history stretching back nearly a century, few companies in the Mahoning Valley can claim to have been involved in as many of the region’s structures as Diamond Steel Construction.

Diamond Steel was founded by Clarence Smith Sr., who had previously been a structural ironworker, in 1928. His son, Clarence Jr., took over the business in the early 1950’s, and shortly thereafter, Arnold Collins joined the ranks—initially as controller, and eventually becoming financial vice president. Arnold’s son, David Collins, came onboard in 1976 when he purchased a small financial interest in the company, and David has been at the helm of Diamond Steel since purchasing the controlling interest in 2005.

Diamond Steel, and the industry as a whole, have undergone drastic changes and adaptations during its existence.

“In the early days, steel erection was a very tough industry. They didn’t really believe in bolts for long term stuff—it was all hot rivets. You had to heat them up in the fire and throw them up to the workers hammering them in place,” says Collins. “The industry was a lot more crude back then, because they didn’t have the types of equipment we have now to make it easier and a lot safer. Safety has become a focus of utmost importance.”

In the beginning, Diamond Steel specialized exclusively in structural steel frameworks, but in the 1940’s, the focus began to shift slightly.

“We found our niche during World War II when we got involved in maintenance for the steel mills: Youngstown Republic, Sheet & Tube in Campbell, Brier Hill, some at US Steel, and Republic Steel Warren, which was the last blast furnace in the Valley,” says Collins. “It was a sad day when that [Republic Steel] closed, but we were lucky enough to get our vice president, Ryan McBride, from that crew.”

Collins likens Diamond Steel’s current business model to a three-legged stool: consisting of steel erection, industrial maintenance, and crane rentals. And, while the proportion of each division can swing from month to month and year to year, that diversification helps the company balance their work volume when one area of the business might be slower than the others. Today, Diamond Steel does a great deal of maintenance at facilities like Ergon, Inc., NLMK, and Hickey Metal Fabrication.

“In the heavy metal industry especially, there’s always maintenance to be done,” says Collins. “There’s always welding and corrosion, so pieces need to be replaced frequently, and reheating furnaces requires a lot of structural maintenance.”

In addition to maintenance, Diamond Steel also boasts the largest crane fleet in the Mahoning Valley. When Collins joined the company in 1976, they had four cranes. Today they have thirty. However, the fleet didn’t simply appear overnight. Instead, Diamond’s crane rental business built up slowly over the decades, adding a unit here and there when it was a practical investment. “We’ve developed our crane fleet to the point that we can provide large enough equipment to handle just about any job in the area,” says Collins. “Originally, our largest was a 30-ton. Today, we have a 275-ton that can sit at the goalline of a football field and pick up 1000 pounds at the 50-yard line. We rent them to builders for placing wood trusses, HVAC contractors who need to lift units, and electricians setting transformers,” adds Collins.

While the company never kept a comprehensive log of all the structures they worked on, a short sampling of their portfolio includes work on the original Isaly’s Dairy building in Youngstown (currently occupied by U-Haul), Youngstown State University, the Butler Institute of American Art, the Mahoning County Courthouse, and many area schools and churches. Diamond Steel also contributed to the structural work (with Connell, Inc., a local competitor) in the new headquarters of The Builders Association of Eastern Ohio and Western Pennsylvania, a skilled trade organization to which they belong.

“We’ve got some good competitors in the Builder’s Association but they’re also friends. We all play by the same rules, so we look out for the good of the industry,” says Collins. “It’s a good group of like-minded individuals.”

On that note, Diamond Steel was one of many representatives from 16 skilled trades that participated in the inaugural Mahoning Valley Skilled Trades Expo at the Canfield Fair in 2019. The event—a collaborative effort including the Builders Association, the Western Reserve Building Trades, and several educational centers in eastern Ohio and Western Pennsylvania—surpassed expectations for attendance and interest.

Collins hopes the success of the event helps encourage a renewed interest in the trades, because he cites the difficulty in finding qualified workers as one of the biggest challenges facing the industry. But, along with the increased participation of young people at events like the Youth Trade Expo, he finds the growing number of women entering the trades to be especially encouraging. For information on applying to become an ironworker or crane operator, visit MVskilledtrades.com. 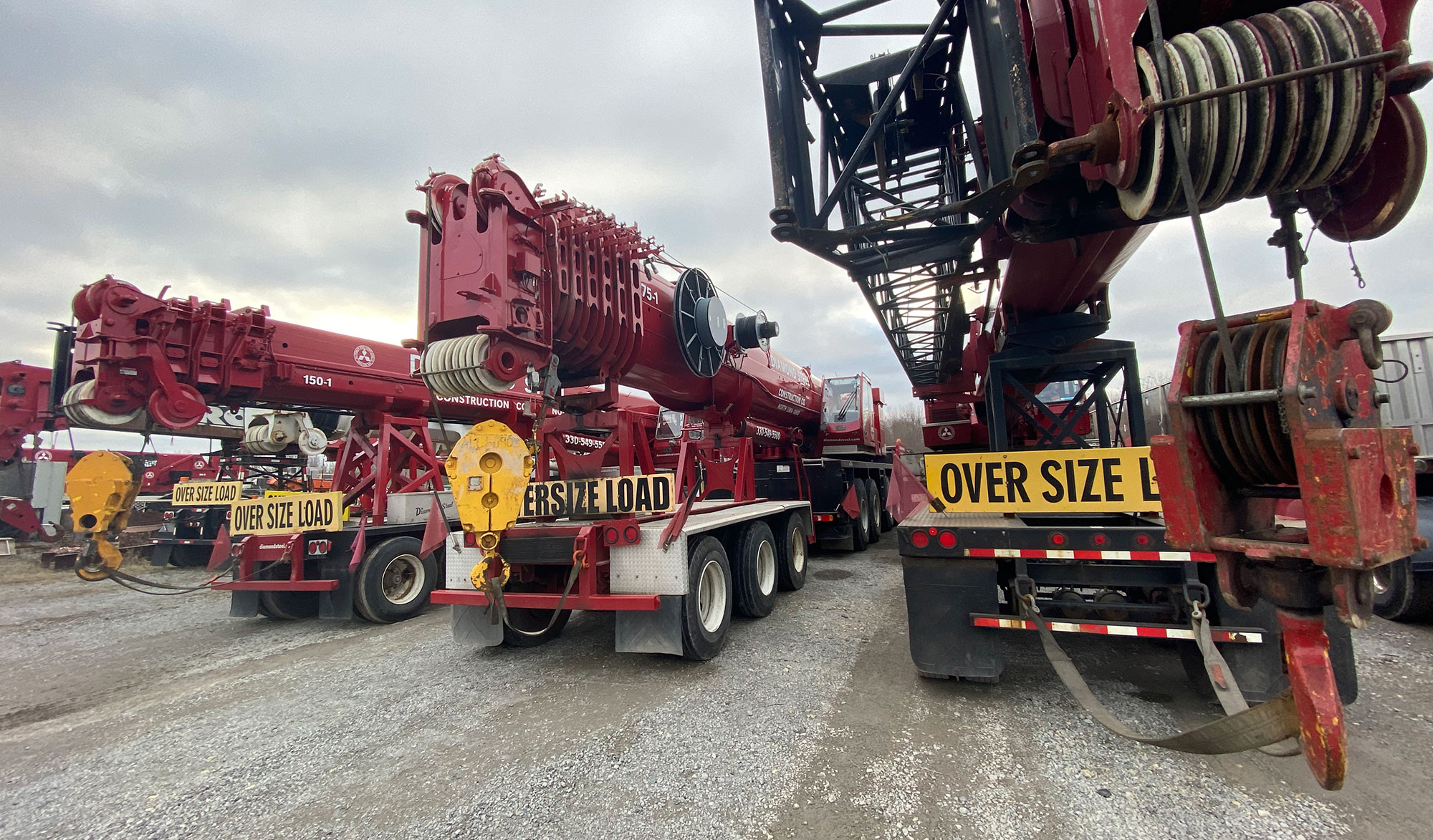 Looking ahead, Collins hopes to see some of the proposed public infrastructure investments come to fruition, as it could provide a big boost to many contractors in the region.

“We don’t do bridge work, but our cranes lift beams for those that do. Although 2020 was a bit of a struggle, we’ve been lucky enough to keep some work going, and we look for 2021 to see a good rebound.”